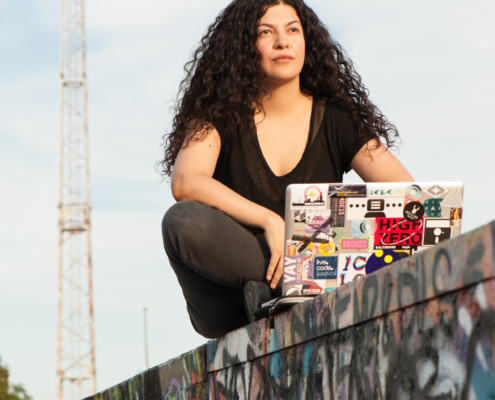 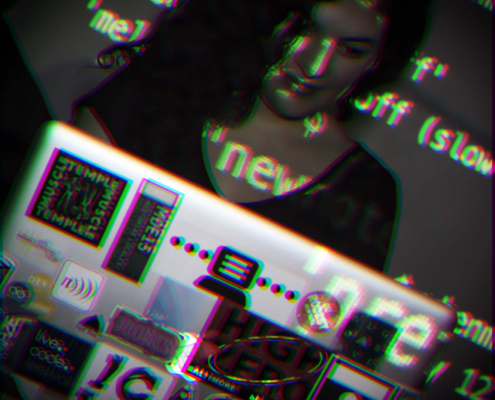 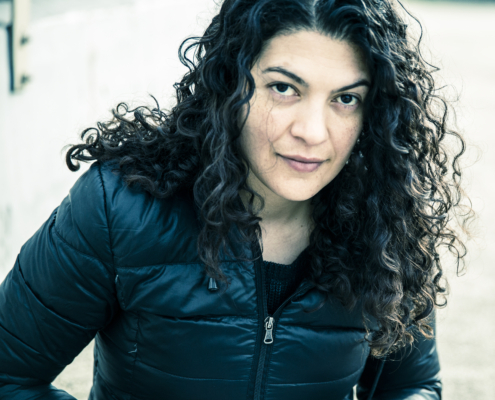 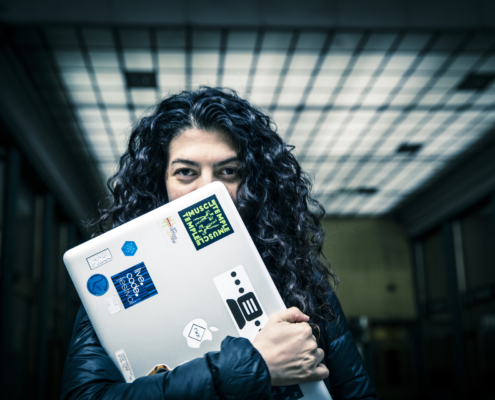 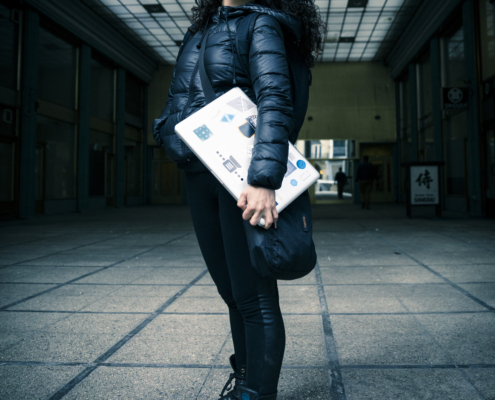 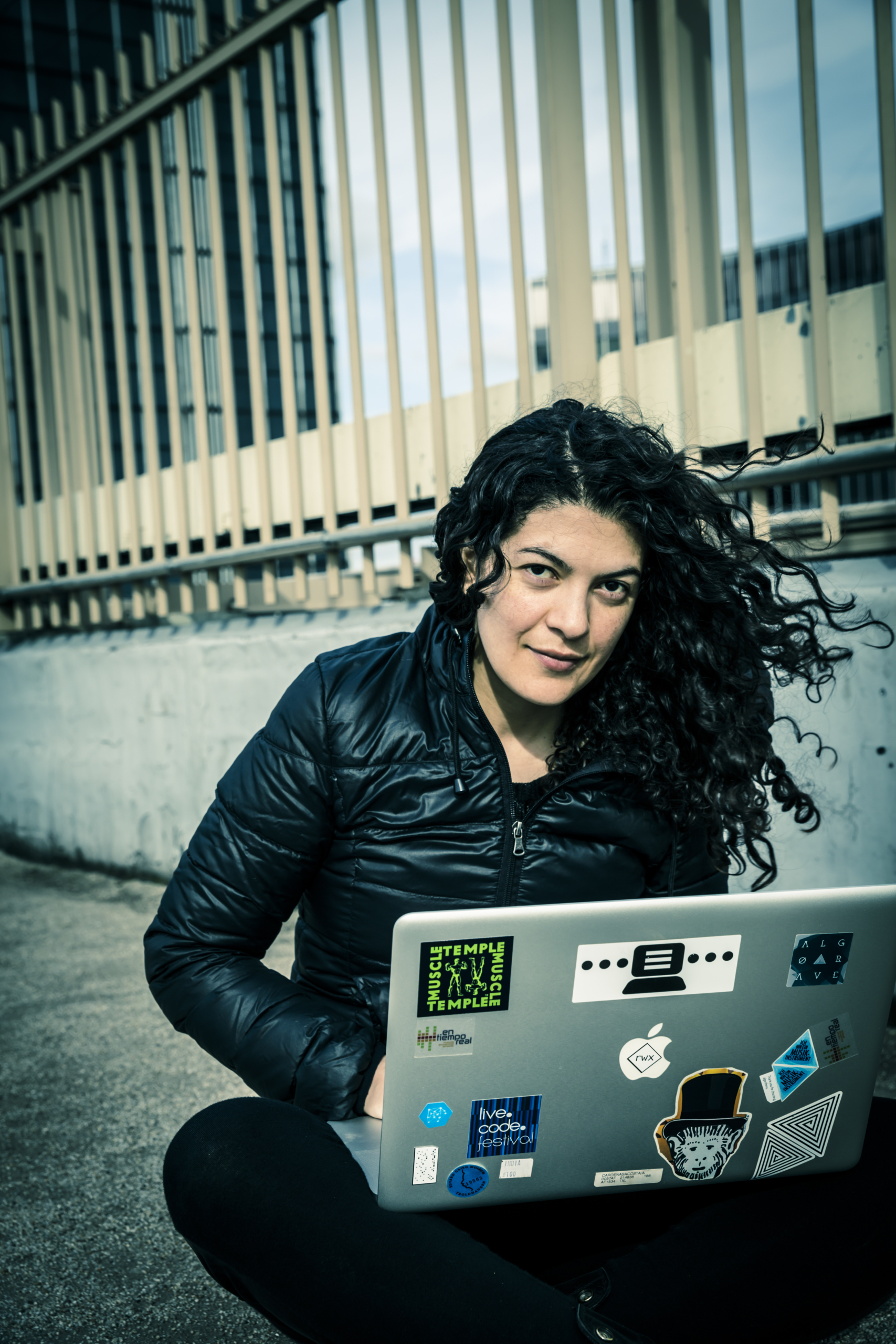 Alexandra, born in Bogotá, Colombia 1976 studied Composition at the Los Andes University in Bogotá, Colombia, and later completed a Sound Studies and Sonic Arts Master’s Degree at Universität der Künste, Berlin.
Besides her live-coded music works, she has composed contemporary pieces for orchestra, ensembles, and soloists, and worked with theater companies in Mexico, Belgium, and Germany.

In 2003 she was granted an Artistic Residence at the Multimedia Center in the National Center for the Arts in Mexico City.
In 2010 she was granted a scholarship to be part of the program Prácticas del Vuelo at the Centro Mexicano para la Música y las Artes Sonoras (CMMAS) in Morelia, Michoacán, where she composed a piece for Ensable 3 and live electronics. In 2010 she was also invited to participate at Visiones Sonoras Festival at CMMAS.
Since 2008 she works with SuperCollider, programming and improvising music. She is constantly creating projects at the Multimedia Center in Cenart, with the support of Robotics and Audio Workshops. She also works with the theater company “Quinta Teatro” creating interactive instruments and live electronics music for their plays.

In 2011 FONCA and CONACYT gave her a grant to be an artist resident at Tokyo Wonder Site in 2012. She wrote a piece for Nanae Yoshimura (koto) and Suzuky Toshiya (recorder) with live electronics. She has also worked as curator and organizer of two festivals devoted to experimental electronic music in Mexico City: Odiuresion for Radio UNAM and the independent Festival ArsFutura for its first two editions.

Her work focuses on the algorithmic behavior of music, and the exploration of musicality within code.
She is a core member of the international algorave community and performs worldwide using the live coding platforms SuperCollider and TidalCycles.
In 2017, she was the Chair of the International Live Coding Conference in Morelia, Mexico.

Being highly active as a speaker and performer of live coding, she is a regular guest at festivals, venues, and exhibitions worldwide, among others at the Kurukshetra Festival (India), Transmediale Festival (Berlin), Heroines of Sound Festival (Berlin), Tokyo Wonder Site (Japan), and Digital Arts Festival (Zurich).

Besides her live-coded music works, she has composed contemporary pieces for orchestra, ensembles, and soloists and worked with theater companies in Mexico, Belgium, and Germany. Her independent research on live coding and decoloniality has taken her to investigate, among other topics, ancestral knowledge, the sublime, randomness, Artificial Intelligence, Machine learning, embodiment, cyberfeminisms, privacy, and freedom in digital media. Her current work in progress, the opera CITIZEN4 for Virtual Reality, is a juncture point in her research, performing, and composing experience.
Alexandra Cárdenas lives in Berlin, and she has been appointed to the Heroines of Sound Mentoring Program 2021-2023. She was awarded a German Musikfonds and a Deutscher Musikrat grant for her research in 2021 and 2022.

Alexandra Cárdenas, often working under the CyberID tiemposdelruido, also sees live coding as something revealing, where it frees music “aesthetically and technically from consumerism.” As a composer of a classical music background, Cárdenas grew tired of the limitations of commercial software, moving on to open-source environments for creative production. In doing so she became a part of a vital live-coding scene in Mexico City, where she organised two festivals. The relative accessibility of using open-source software was an important factor, among others, for its embrace by the new economy of the capital city, in turn becoming a social force that resonates with many Mexican artists. “Identity, resistance, interest, curiosity, respect,” writes Cárdenas about the host country of the next International Conference on Live Coding. “Live coders are quite an inclusive and transparent community, and this is very important in such a troubled country with so much discrimination against women, and with such racial and other social issues. It opens a safe space to create. This is the hacker philosophy. And generally speaking, the mix of artists and hackers tend to be a happy mix.”

Kurukshetra is a large-scale techno-management festival in Chennai, India, and the next edition will hosting a two day workshop by Alexandra Cardendas (previously). Alexandra was involved in the creation of the vibrant live coding scene in Mexico City, and hopefully will seed a new community in India, by introducing them to SuperCollider, Ixi Lang and Fluxus as well as the shared ideas and ethos behind them. The workshop will run from 30th to 31st January 2014, and more information is available.