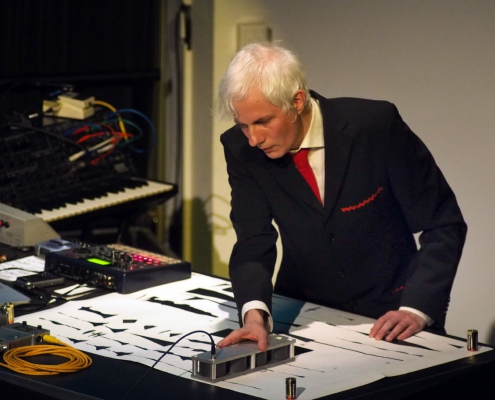 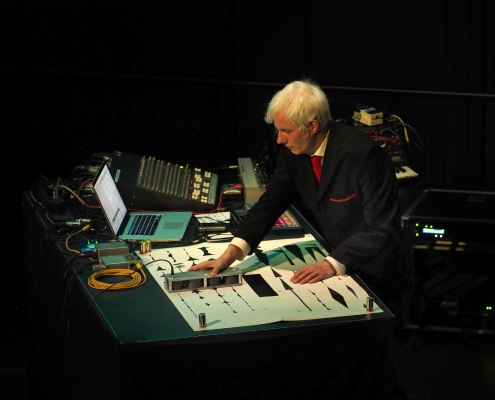 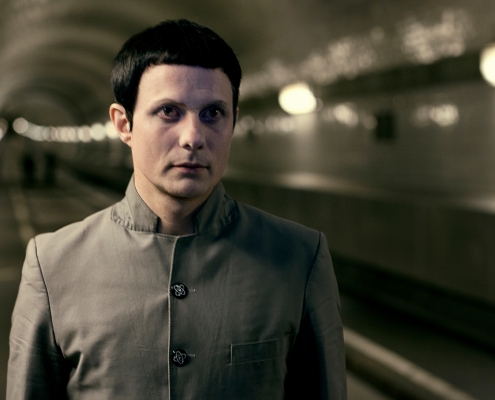 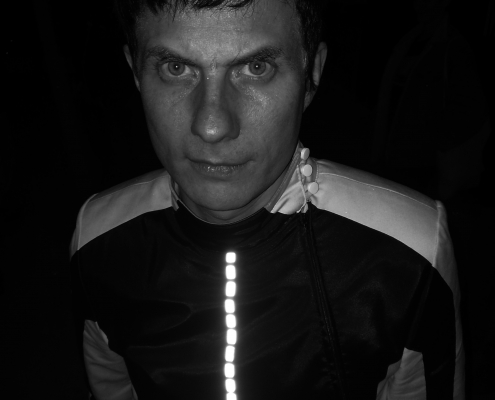 Felix Kubin is a composer, creator of radio plays, curator and media artist based in Hamburg, Germany.
He began recording and performing experimental electronic pop music at the age of 12. In the 1990s he turned to electroacoustic noise music, started to compose futuristic pop music and launched the independent record label “Gagarin Records”. Over the past decade he has performed at more than 100 international music and media art festivals including Sonar, Transmediale, Mutek, ISEA, Wien Modern, Borealis and Ars Electronica. In 2018, he co-founded the Festival “papiripar” for experimental pop and performative art in Hamburg.
Since 2001, Kubin has been writing and producing radio plays for national radio stations WDR, BR, DLR, SWF and Vienna’s ORF Kunstradio. His radio plays were awarded several prizes, amongst them the Prix Phonurgia Nova (for „Säugling, Duschkopf, Damenschritte“), Best Radio Play Of The Year and Best Audio Book (for „Orphée Mécanique“) and ARD Online Award (for “The Machine Stops”). He has also composed music for film and theatre productions, including work by Christoph Schlingensief, Mariola Brillowska, Robert Florczak and Schorsch Kamerun. Since 2005, his commissions include
writing compositions for chamber orchestras. He has created exclusive works for “Internationes Musikfestival” (Hamburg), “MaerzMusik” (Berlin), NDR “das neue werk” (Hamburg), Festival “Borealis” (Bergen), “Presences Électronique” (Paris), Elbphilharmony (Hamburg) and Deutscher Musikrat (Bonn). In 2017, he was part of SAVVY FUNK / dOCUMENTA14 RADIO with 20 episodes of his live radio show “Me & My Rhythm Box”. Furthermore, Kubin has been invited to give workshops and lectures at art institutions and universities in Europe, the USA, Canada and South America. From 2013-2015 he taught experimental film sound at the HfBK (university of fine arts) in Hamburg. In 2020 he is an artist in residence at Villa Aurora, Los Angeles.
His music is released on editions Mego, A-Musik, Bureau B, Dekorder, Minimal Wave and his own label Gagarin Records.

Hubert Zemler
Drummer, percussion player born in 1980 in Warsaw, Poland. An active member of Warsaw’s independent music scene. A recognized sideman. His musical education started in 1987 in the Karol Szymanowski National Music School in Warsaw. He first played the piano, but after three years he switched to percussion as his main instrument. In the beginning he focused on classical music, but in the end 1990’s he became interested in jazz. In 1999 he started studying percussion in Fryderyk Chopin’s Musical Academy in Warsaw. At that time he was inspired by jazz, contemporary music and improvisation. In 2002-2003 Zemler along with his brother Konrad Zemler (guitar), Radosław Nowicki (saxophone) and Wojciech Pulcyn (contrabass) toured the Middle East (Syria, Jordan, Egypt and Lebanon) promoting Krzysztof Komeda’s work. Over the next years he collaborated with musicians representing various, often very distant musical realms. From symphonic orchestras (Sinfonia Varsovia, The National Opera), through jazz (Zbigniew Namysłowski, Wojciech Staroniewicz), world music (Rei Ceballo & Calle Sol, Ritmodelia), rock and blues (Incarnations, Neurasja), sophisticated pop (Natu), blues and folk (Incarnations, Babadag) to contemporary music (Tadeusz Wielecki, Zdzisław Piernik, Arturas Bumsteinas) and improvised music (Slalom, Horny Trees, SzaZa, Kapacitron). In 2012 starts to collaborate with Piotr Kurek in his project “Piętnastka”. Winning a bronze medal at the Delphic Games in South Korea in 2009 inspired him to play improvised solo percussion concerts.

Magdalena Kordylasińska & Miłosz Pękala
At the age of 18 Magdalena Kordylasińska began her drum lessons in the class of Dariusz Jagiello. In 2006 she graduated with honors from the Academy of Music in Warsaw. She completed her studies at the Royal Conservatory of Music in Copenhagen, under the direction of Gert Mortensen (a Socrates / Erasmus scholarship). She is a winner of many competitions like First Prize at the National Percussion Hearing in Warsaw (2001), First Prize at the International Percussion Competition in Warsaw, Mikołaj Stasiniewicz in Warsaw (2004), Grand Prix and the audience award at the Polish Radio Folk Music Festival “Nowa Tradycja” (2006), and many more.
She collaborated with the Sinfonia Baltica Orchestra, The Royal String Quartet, the Polish Radio Orchestra, the Szczecin Philharmonic Orchestra, the National Philharmonic Orchestra, Sinfonia Varsovia, and such outstanding soloists as Marta Klimasara, John Beck, Emmanuel Sejourne, Steven Schick and Mathias Reumert. In 2004, she participated as a soloist in the premiere and recorded the “Concerto for marimba and orchestra” by Mikołaj Hertel.
Since 2002 Magdalena Kordylasińska is collaborating with Miłosz Pękala, with whom she creates the drum duo Hob-beats – the only active band of this type in Poland and one of the few in the world. In addition to percussion compositions, there are also transcripts (eg ” Alborada del gracioso ” by Maurice Ravel, ” Goldberg Variations ” by Johann Sebastian Bach) and compositions especially written for the band, performing in Poland and abroad (eg in Germany, Israel and Brazil).
Miłosz Pękala is a member Kwadrofonik, one of the most cherished quartets in Poland. Their fantastic marriage of funeral folk and contemporary classical, “Requiem Ludowe”, was met with great acclaim across the country. He’s a versatile musician, playing in Mitch & Mitch and exploring percussion together with Małgorzata Kordylasińska-Pękala in a creative mix of electroacoustic sounds. At Unsound 2017 he appeared alongside The Jon Gibson Group, performing “Visitations”.

CEL LP is out February 14, release by Buereau B

TAKT DER ARBEIT is inspired by a handful of industrial and instructional films from the early 1960’s until the early 1990’s that portrait different forms of work. Felix Kubin is translating these historic documents into a musical poem of conceptual depth. TAKT DER ARBEIT – the beat of work – is not only serving as a title but also as constructive element in this endeavour.

Being hunted down by the ever accelerated pulse of our reality is an omnipresent issue in capitalist societies of the the Western world. Living in times of constant exhaustion, it’s not only our bodies that have been disciplined by and synchronized to the rhythms of working processes, but also our minds that rage in the tempo of our surroundings. Following an almost analytical effort, Kubin and an ensemble of 3 percussionists are investigating the different qualities and intensities of time that are catalyzed in working processes. While picking up precise temporal and motoric motives of the films, condensing paces and excavating rhythmic patterns, the ensemble is mapping out an animist choreography, shifting from a time when labour was still relying on bodily efforts to a time when machines and ticking clocks seem to reign and model our perception.

The result is a critical and poetic reflection on the rhythms of our daily life and yet another example of Felix Kubin’s skills as a composer, placing him in the field of orchestral music.

To their music the video artist Josephin Böttger (Hamburg) has composed a film collage that zooms into the audiovisual world of well-known science fiction classics to search for black holes, white spots and interferences in the cracks of the collective subconsciousness. Key scenes of the genre are rebalanced through alienation, dislocation and juxtaposition. The classical narration is dissolved into its components, the film becomes the architecture and meta-language of the External, a string of signs that (hopefully) will be understood by all inhabitants of our galaxy.
“Pulsate, Vibrate, Alternate, Plastic.” A deconstruction of cinema to the standstill of time. 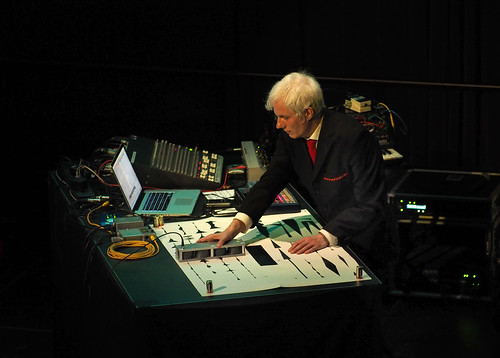 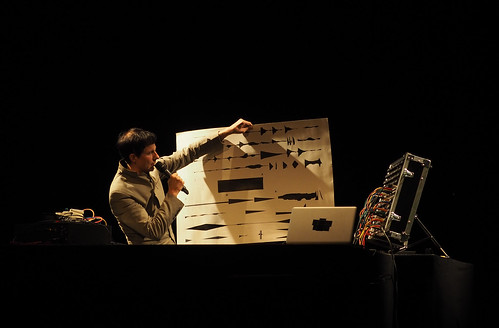 Originally developed as a film score “Takt der Arbeit” is inspired by a handful of industrial and instructional films from the early 1960’s until the early 1990’s that portrait different forms of work. Felix Kubin is translating these historic documents into a musical poem of conceptual depth. “Takt der Arbeit” – the beat of work – is not only serving as a title but also as constructive element in this endeavor.

Originally developed as a film score Takt der Arbeit is inspired by a handful of industrial and instructional films from the early 1960’s until the early 1990’s that portrait different forms of work. Felix Kubin is translating these historic documents into a musical poem of conceptual depth. Takt der Arbeit – the beat of work – is not only serving as a title but also as constructive element in this endeavor.