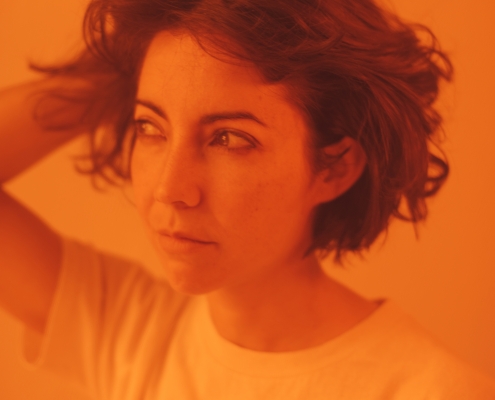 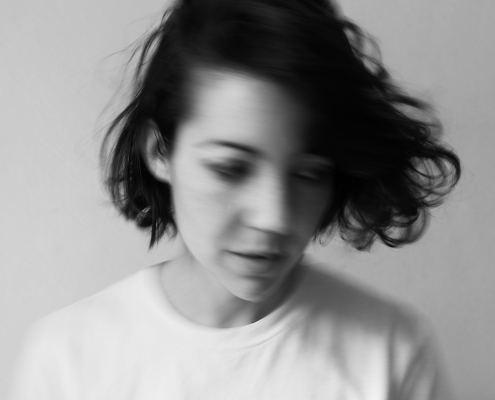 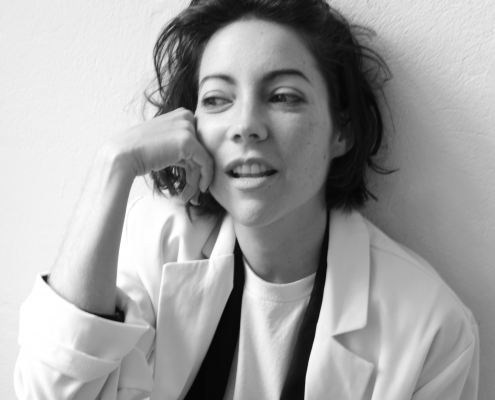 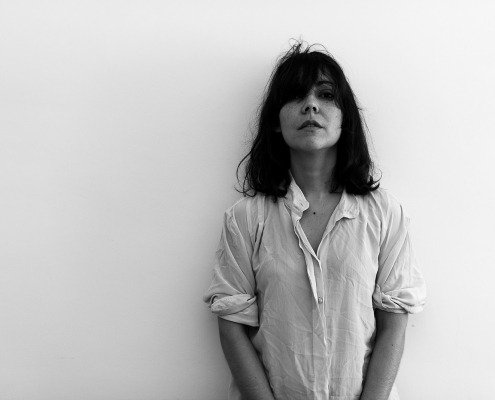 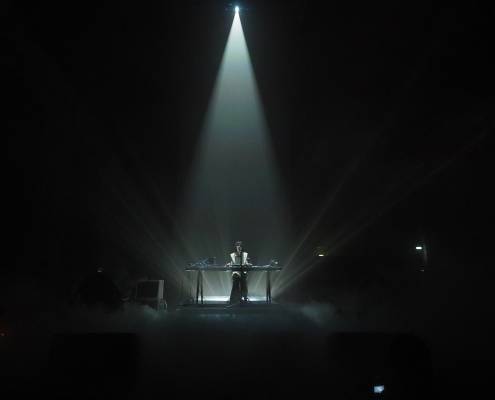 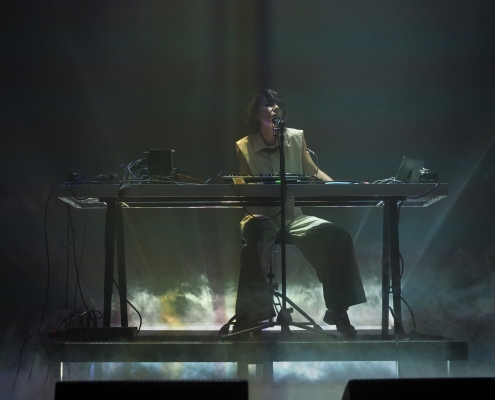 LUCRECIA DALT is born in Pereira, Colombia in 1980, and now based in Berlin, Germany, Lucrecia Dalt has seen her profile as a musician, sound artist and performer develop into high international regard. Her recorded albums – numbering seven in total, since her 2005 debut – encompass the dual worlds of avant-garde and contemporary electronics, drawing in influences from her academic background as a civil engineer as well as musics and philosophies from across the world.

Dalt’s most recent album – the acclaimed Anticlines, released May 2018 through New York’s RVNG Intl. – was created from synthesis, voice, vocoding and feedback among other musical techniques. It has been described as a marvelous exploration of mercurial ambient music.

As a performer, Dalt illustrates philosophical metaphor about existence creating a complex, haunting narrative, embodying many artistic disciplines with the thought and contextual detail that goes into her work; deeply framed messages are tied together with abstract jagged music, rigid sound design and haunting, poetic vocals, to create a richly layered performance. It can at first feel a bit convoluted, but deep inside the music and beyond the lyrical narrative lies a profound piece of insular art.

Lucrecia Dalt dove into music full–time after working as a civil engineer in Colombia. Her pursuit of avant–garde sound brought her to Spain and then to Germany, where she currently resides. While highly technical, Dalt has always balanced the sharp mind of a methodical thinker with the restless heart of a passionate artist, gradually seeking a way to create hand–crafted mental states through sound, maintaining a quantity of emotionality, merging accessible, melody with abstract structures, handcrafted effects and sampling. Her recent work develops around the ideas of repositioning fiction, time perception, scale, telluric affect, repetition, vocoding and sound dynamics.

With her surrealist experimentations, Colombian musician Lucrecia Dalt draws from a vast wealth of artistic and philosophical influences: From New German Cinema and artificial intelligence to the politics of listening and technological ideas of the future.

Over the years, Dalt has collaborated with Berlin’s F.S. Blumm, Barbara Morgenstern, Gudrun Gut, L.A.-based musician Julia Holter and most recently with the group comprised of Rashad Becker, Charlotte Collin, Lucrecia Dalt, Laurel Halo, Julia Holter, Kohei Matsunaga (a.k.a. NHK’Koyxen), and Grégoire Simon for a telepathic collaboration.
After several underground releases, in 2012 Dalt debuted her first LP, Commotus, on Berlin-based Human Ear Music, a label known for backing genre-bending experimentalists Ariel Pink, Nite Jewel, Julia Holter – the title of the album fittingly translates to “woken”, “agitated” or “disturbed”, reflecting the music’s ability to seamlessly, almost-cinematically shift in mood, from minimal and ethereal to multi- layered and wild. Dalt stuck with the label for 2013’s Syzygy, a record that dwells in melancholy, assaulting listeners with unfamiliar electronics. Rhythms hammer into the slabs of sound with precision, sequenced tones aggressively stamp indentations into the stiff frame.
In 2014 she releases the self-titled EP on Nicolas Jaar imprint “Other People”, following and expanding upon the line of thought put forward in her 2013 album Syzygy, Lucrecia Dalt ends in a place familiar, yet noticeably different. Its two tracks, ‘Esotro’ and ‘Veta’, continually defy expectation — haunting vocal ballads that trickle into clouds of white noise — but for an acquainted listener that won’t surprise.
In 2015 Lucrecia releases her LP “OU” on the Berlin-based label Care of Editions as part of a scholarship granted by Music Board Berlin. This LP is the result of working in music which engages the history of modern filmmaking in Germany and build upon an ongoing technique used in her work, which is to provoke some entanglement between the emotional dynamic experienced during the viewing of a film, and what is experienced during the music production process.

Lucrecia Dalt’s concern with boundaries and edges shape the lyrics and music of Anticlines, her sixth album. Paying careful attention to pace, breath, and texture, Dalt microtonally shifts the distance between speech and song while using traditional South American rhythms to support her contemporary electronic composition.
Lucrecia arrived at the atmosphere of Anticlines after several months of studying and creating new patches for the Clavia Nord Modular, forming a rhythmic feedback flow with it, a Moogerfooger MuRF, and her voice. The overall effect of cavernous space backdroping Dalt’s intimate vocal phrasing rewards contemplation, supported in the physical formats of Anticlines by a lyric booklet documenting Lucrecia’s collaboration with Australian artist Henry Andersen.
The album opens with “Edge,” bordering on a pathological circlusion of self upon other. The lyrics depart from the Colombian myth of El Boraro, an Amazonian monster who turns its victims insides to pulp before sucking them dry and inflating their bodies like balloons to lifelessly float away. “Tar” ponders human dependence on earth at the boundary of the heliopause, where to inhale might be like breathing tar. Dalt’s distant and obscured vocals end with, “we touched only as atmospheres touch.” The sonic rise and fall of “Analogue Mountains” is inspired by martian traces found in Antarctica embedded by meteorite ALH84001, suggesting that “we might well be living in mountains transferred from Mars.” The steadily winding music on “Concentric Nothings” descends with the lyrical exercise of dissolution “let my touch be indistinct and instinctive.” Interspersed with the lyrical pieces of Anticlines are instrumental interstitials that demonstrate preceding concepts — as if to say, “this is what antiforms sound like, and this is what the universe’s indifference sounds like.” Dalt’s ongoing experiments with visual artist Regina de Miguel support these ideas, their practice allowing the objects of their attention to slip in and out of being.
Her slippery spoken word and performative nature is recalling the work of Laurie Anderson, Robert Ashley, Asmus Tietchens, or Lena Platonos. While touching stones, The Thing by Dylan Trigg, Cascade Experiment by Alice Fulton, and Wretched of the Screen by Hito Steyerl are but a few formative scripts that support Dalt’s exploration of the betwixt and between.

Lucrecia Dalt is hosting a regular radio show at RBMA Radio.
Every 4th Monday of the month she presents
“Pli – which generates a portrait and a map of sounds constructed from the films that have influenced the work of each guest.”

ANTICLINES (Rvng Intl.)
The name of the album comes from Dalt’s previous work in geotechnical engineering; an anticline is an arch-shaped rock form that is made of stratified rock of different ages. Disconcerting in the best possible way, Anticlines melds spoken words, abstract melodies and cold electronic sounds. It should be listened to when you want to think and be challenged. Best enjoyed as a full LP, although some tracks still stick out. Atmospheres Touch is a beguiling melodic effort and Axis Excess makes the hairs on the back of your neck stand up with its odd sounds and feelings. This is not background music!
Interspersed with the lyrical pieces of Anticlines are instrumental interstitials that demonstrate preceding concepts — as if to say, “this is what antiforms sound like, and this is what the universe’s indifference sounds like.” Dalt’s ongoing experiments with visual artist Regina de Miguel support these ideas, their practice allowing the objects of their attention to slip in and out of being.
Her slippery spoken word and performative nature is recalling the work of Laurie Anderson, Robert Ashley, Asmus Tietchens, or Lena Platonos. While touching stones, The Thing by Dylan Trigg, Cascade Experiment by Alice Fulton, and Wretched of the Screen by Hito Steyerl are but a few formative scripts that support Dalt’s exploration of the betwixt and between.