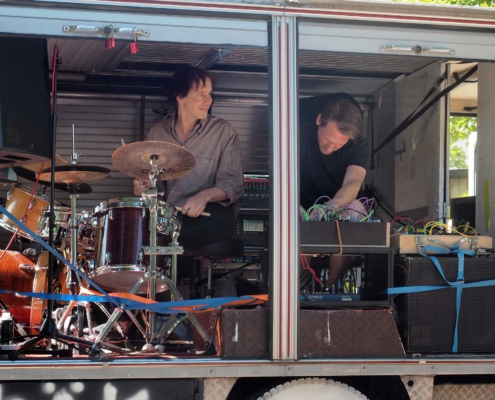 One must imagine hÄK / Danzeisen as a man-machine apparatus. A collection of cables, resonating bodies and restless limbs that together question all routines. Who overthrow conventional role of instruments and explore the possibilities of a new sound language.Bernd Norbert Würtz alias hÄK operates modular synthesizers, self-soldered circuits and control knobs. Philipp Danzeisen plays a drum kit enhanced with triggers and sensors. These two poles are connected to an interdependent whole in which a constant musical dialogue takes place. The dependencies within this system have been meticulously defined by hÄK / Danzeisen: Drum rolls and sound modulations are interconnected in such a way that there is no contradiction between the strict technological structure and the creative outburst that is possible at any time.

What drives hÄK / Danzeisen is the basic idea that the contrast between acoustic drums and synthetically produced sounds must be overcome in order to create a new experience. Würtz, Danzeisen and their combined instrumentation simultaneously rub up against the same edges, finding a single, piercing voice.Ideal manifestations of this approach are the duo’s live performances: raw energy that oscillates as precisely as it surprises between drones, abstraction and noise attacks, driven by an impudent take on jazz. Constantly oscillating between the registers of “composed” and “improvised”, each performance by hÄK / Danzeisen ultimately becomes one of a kind.Prior to forming the duo in 2019, both musicians were independently active in different genres and contexts. Philipp Danzeisen studied jazz percussion at the New School University in New York and sound design at the Theatre & Dance Department of the University of California in San Diego. He has played in numerous musical projects with Jarry Singla, Jan Gerdes, Matt Otto, Joe Fonda and others, and regularly works at the intersection of music, dance and theater with directors such as Einar Schleef and Jan Fabre, as well as with choreographers William Forsythe, Meg Stuart and Rabih Mroué.Bernd Norbert Würtz has worked as a composer and sound designer for institutions such as La Gaîté Lyrique in Paris and the Royal Opera House in London. He produces music for film productions as well as for international advertising campaigns and composed soundtracks for Alexander Herzog, Peter Dörfler, Dante Ariola and Luc Besson. From 2008 to 2018, Würtz lived and worked in Paris, where he was increasingly engaged in experimental music and released under the pseudonym hÄK on underground labels such as KommaNull and Exhibitronic. He also co-hosted “Epsilonia”, the experimental music show on Radio Libertaire in Paris.