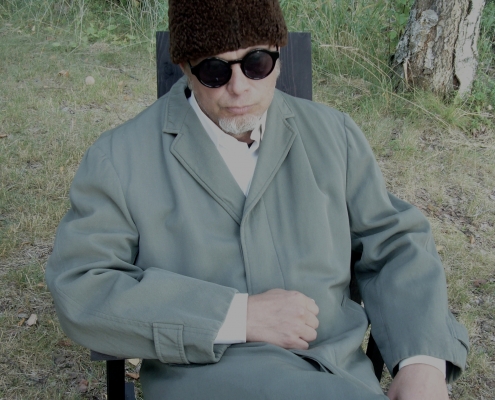 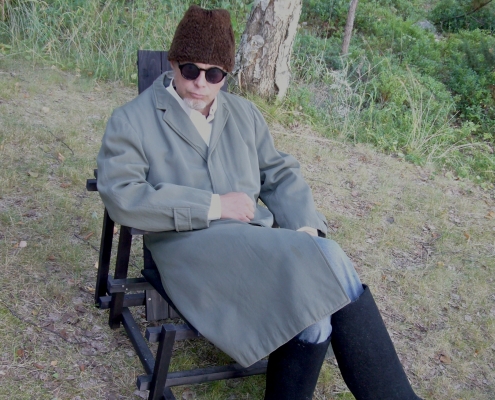 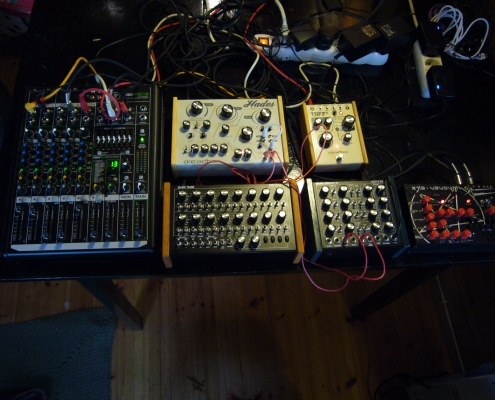 One indivisible, inseparable half of Panasonic / Pan Sonic, a crucial and visionary duo in electronic music for over two decades, from the beginning of the 90s until a few years back, which definitively ceased activities after the irreparable disappearance of its other half, the brilliant musician Mika Vainio.

Originally from Helsinki, but having sprouted up in several other places over the years where the air was more breathable for there was greater freedom, they trekked through new possibilities in sound, timbre and structure, in a field which covered all the knowledge that interested them. Political, philosophical, cultural – human. Musically speaking, and from the viewpoint of the prevalent vocabularies, they mixed techno with the spirit of the most caustic rock, with dub, and the most enlightened side of what was to be known as industrial. Ilpo Väisänen returned to solo albums through now canonical Editions Mego in 2015 with ‘Communist Dub’, ‘I-LP-O in Dub’ in 2017, and last year’s larger album, ‘ÄÄNET’, in honour of his late friend. Peppered with some field recordings from a Pan Sonic tour of the USA, this album makes for the most dignified, powerful and delicate elegy.

His work continues to be marked by a fierce independence at every level, with the metaphysical trinkets of his own creation alongside the more usual technologies, making music so we don’t forget the reasons for fighting.

Ilpo Väisänen, born in Kuopio / Finland in 1963, studied visual arts and ceramics, graduated from Turku art academy in 1991 and in the early 90s took part in several solo and group exhibitions.
He formed the performance-art group ultra3 in 1991 and in 1993, together with Mika Vainio, the sound group sinO which turned into Pan Sonic (originally called Panasonic).
Pan Sonic performed in clubs, galleries and at festivals in Europe, America, Australia, and Asia, for instance Southbank/Queen Elizabeth Hall, The Barbican (London), Centre Pompidou, Fondation Cartier (Paris), Volksbühne, MaerzMusik festival (Berlin), Sónar festival (Barcelona); they did collaborations with Masami Akita (Merzbow), FM Einheit, Erkki Kurenniemi, Barry Adamson, Keiji Haino, Charlemagne Palestine, Sunn O))), among others; had numerous CDs/LPs, live releases, album collaborations, and remixes (e.g. for Ryuichi Sakamoto); composed music for Comme des Garçons fashion shows; gained the Ars Electronica award in 2005.
Apart from that he is also playing some kind of free-form noise with a tendency to drone with Dirk Dresselhaus (Schneider TM) in a duo formed as ANGEL in 1998, renamed DIE ANGEL in 2017.

Together with Mika Vainio, Ilpo Väisänen was part of the Finnish duo Pan Sonic, one of the most ground-breaking and innovating projects in contemporary electronic music. In a musical form in which sequencing and recording music using computers is standard, the group was known for recording everything live, straight to DAT (Digital Audio Tape) using home-made and modified synthesizers and effect units. In December 2009 their split was announced, Ilpo and Mika continued with their own solo projects.
Ilpo’s former releases on his own label Kangaroo, a sub-label of Raster-Noton, have clearly shown his personal affinity with dub music.
Apart from that he is also playing some kind of free-form noise with a tendency to drone with Dirk Dresselhaus (Schneider TM) in the duo Angel / Die Angel with the latest outcome: “Entropien I” on the Berlin based label Cosmo Rhythmic.
ANGEL has performed in Europe and North America at festivals like:
Send&Receive, US-Winnipeg / CTM, DE-Berlin (various editions) / Les Siestes Electriques, FR-Toulouse / Teatro Fundamenta Nueve, IT-Venice / Synch, GR-Athens

Ilpo Väisänen is equally working on his solo productions, often under his alias I-LP-O In Dub.

In order to generate his sounds and soundscapes Ilpo Väisänen rarely uses more than the simplest of devices: analog keyboards and other oscillators he’s fabricated himself. In an age of digital ubiquities, his economy of means and anachronistic aura almost constitutes a challenge, indeed a provocation.
One discovers this postulate within the solo releases that Väisänen has issued since 1995. His world permanently fluctuates between hot and cold; composed of creaks, whistles, strange noises and rhythmic improbabilities, it’s a world oftentimes futuristic, yet prehistoric.

Pan Sonic’s Ilpo Väisänen has announced the release of a new full-length ÄÄNET, the first under his new moniker I-LP-ON. The album is set for release on Editions Mego. The project is a homage to Pan Sonic, the influential electronic outfit he founded alongside Sami Salo and electronic music icon Mika Vainio, who died last year. ÄÄNET channels the industrial, ambient, dub and club-orientated sounds Pan Sonic absorbed over two decades.

Pan Sonic’s Ilpo Väisänen and Dirk Dresselhaus (aka Schneider TM) have announced Entropien I, a new album dedicated to Pan Sonic partner Mika Vainio, who died earlier this year.
Released under the name die ANGEL (an updated name to their Angel project), the album is described as an attempt to “break down the soul of noise” and features multi-instrumentalist Oren Ambarchi on two tracks.

Capital Dub Chapter 1 will be released under Väisänen’s I-LP-O In Dub alias, which he debuted in 2015 with the Communist Dub album, also released on Editions Mego.
The new album was inspired by the first part of Karl Marx’s Capital, and according to the label the LP’s “‘circular riddims’ complement the ebb and flow of the circulation of money and commodities.”

A rare solo record from the former Pan Sonic member will come through Kvitnu in October. Due out in early October, Syntetisaattori Musiikkia Kuopiosta is, according to the label, “strongly connected to the place where it was written and recorded: Kuopio.” It’s described as “not a long album,” comprising nine “very varied and rather short” tracks connected without gaps, and it’ll come on limited-edition 12-inch vinyl in a sleeve with artwork using “special elements,” as usual for Kvitnu.

Ilpo Väisänen presents Communist Dub
The I-LP-O In Dub alias finds Väisänen experimenting with spacious dub soundscapes once again, offering the listener the choice “to be pummelled into submission or to reflect on their situation,” according to the press release. Despite the abstract nature of this music, the political themes behind Communist Dub are pointed, referencing revolution in the Ukraine and Libya. The label says “Communist Dub is a ruthless criticism of everything existing, but one ultimately tempered by hope.”