Travel details, please note:
23 KG for check-in luggage
2 flights from and to BE-Brussels, 1 double room 4* (preferably with arrival 1 day prior to the concert)

The biggest (about 2 metres x 0,80/0,90 metres) and best grand piano you can get!
– Fazioli or Bösendorfer or Bechstein or Kawai or BIG Yamaha

DPA microphones will be put into it with magnet stands, to be inserted into FOH master system

Synthie keyboard with “Organ Sound”, into FOH with a DI box interface

Charlemagne Palestine will bring:
TC Helicon Voice Synthesizer with a Shure cordless Mic system attached to it, to be plugged into the FOH 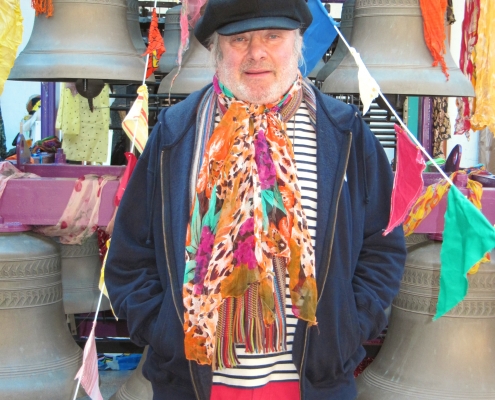 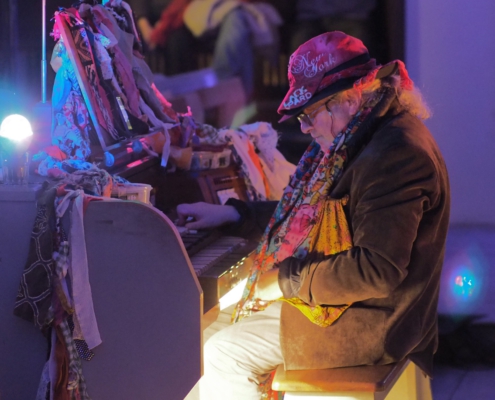 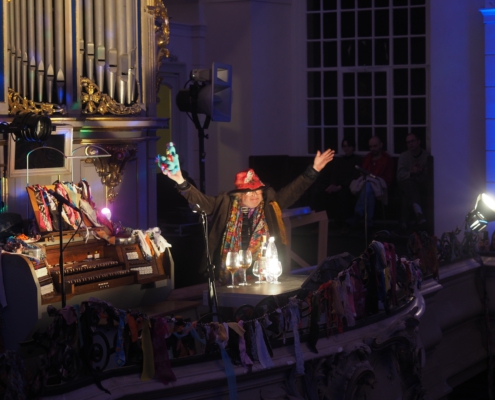 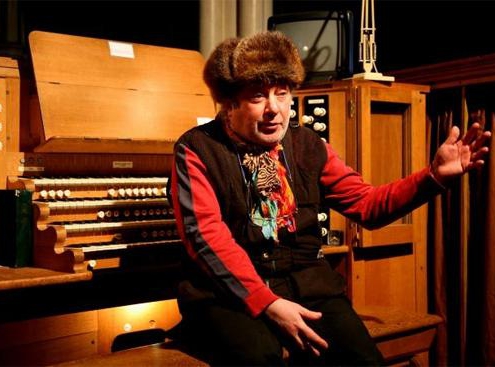 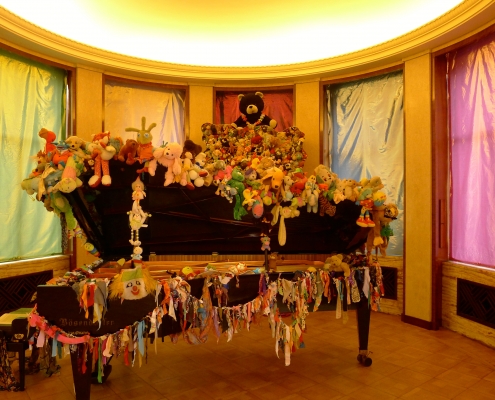 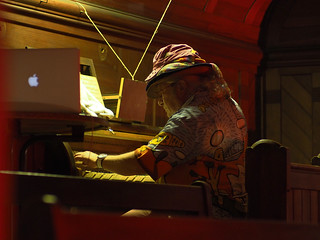 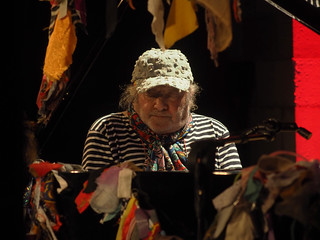 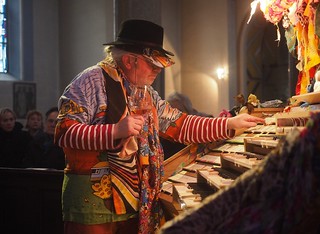 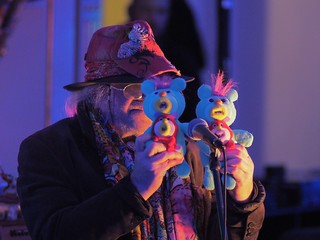 Charlemagne Palestine was born in Brooklyn NYC in 1947. He is a sound artist, composer, performer, video artist and installation artist. Palestine studied at New York University, Columbia University, Mannes College of Music, and the California Institute of the Arts.

A contemporary of Philip Glass, Terry Riley, Phill Niblock, and Tony Conrad; Palestine creates intense, ritualistic, continuum music for electronic sound sources, bell carillons, pipe organs, pianos, voice and other keyboard instruments since the sixties. A composer-performer originally trained to be a cantor, and then a carillonneur; he always performs his own works as soloist. His electronic continuums were his first major pieces. He early on began developing sonorities especially with large numbers of electronic sound oscillators and filters developed by Moog, Buchla, Serge, Arp and Oberheim. These sonorities lasted from several hours to days exploring slow gradual timbral color transformations and beat tone variations creating what he termed his “Golden Sonorities” or the search for the Golden Sound. His continuum form “Strumming” for amplified pianos, develops harmonies, dissonances and clusters with a visceral physical force that pushes the sonic limits of a piano till it no longer resembles one, even often naturally detunes from the force and becomes a new kind of multi spectrum electro-acoustic sound emitting machine. His favorite pianos are the 9 foot long Bösendorfer Imperial which has 9 tones lower than any other piano in the world and the Borgato which is a grand piano with 2 bodies; one played with the hands and one with the feet.
His “Schlingen Blängens”, a sonic continuums form for pipe organs where like in alchemy all the different and varied timbral registers of a traditional church or theatre organ are merged and developed searching for the Golden Sound, using a unique continuum key prolonging technique that allows Palestine to create works developing hundreds to thousands of nuances of organ timbres becoming a massive magical sonorous vibrating storm cloud that interacts with the architecture of each church or theatre edifice. As a vocalist in his epic 2 hour long Karenina he sings in a haunting ghostlike countertenor falsetto register and in other works like his sound/motion videos he sings long tones with gradually shifting vowels and overtones while moving through spaces and places while performing repetitive intense shamanic body action rituals such as throwing himself against walls; running and falling in labyrinthal spaces; singing on high speed motorbikes or while on roller coasters and other amusement park intense motion rides.
Palestine stopped performing from the early eighties till the mid nineties and devoted himself entirely to his forms of plush animal divinity altars as multi-media sculptures and installations. These altars are always an integral ingredient in Palestine’s performances. Since his return to performing Palestine has reissued works from the sixties and seventies on CD and vinyl, created and recorded many new works and has collaborated and recorded with other musicians such as Pansonic, Simone Forti, Tony Conrad, Rhys Chatham, Perlonex, Gol, among others. He now performs regularly in venues and festivals as well as presenting his multimedia installations worldwide.

Charlemagne Palestine is considered one of the pioneers of minimalist music, although he refuses to claim this label for himself. His repetitive piano pieces are rather a part of a Gesamtkunstwerk that combines installations and performances. Playing on a Bösendorfer Imperial grand piano surrounded by stuffed animals Palestine unfolds a sound structure that transforms difference and repetition into complex sound clusters.

Concert/performance (extrait) de Charlemagne Palestine “Mother Of Us All” (2009) from Vincent Vicario on Vimeo.

His solo organ concert in the impressive neo-gothic Zwingli church in Friedrichshain started with an anthem for Rosh Hashanah celebrating the Jewish new year. When he chanted “Oh Palestine – oh Palestine,” was he celebrating himself or was there more to it? We’ll never know for sure. We’ll also never know how this concert would have sounded with a fully functional organ. “The organ is sick” Palestine proclaimed at the end, and as such, he could only do so much. Taped with red dots some of the most basic pipes like the bass flute did not work. Flawed instrument or not, Palestinecreated an impressive reverberation of the church walls.

The American composer, sound artist and film maker Charlemagne Palestine counts as one of the pioneers of minimal music along with La Monte Young, Terry Riley and Philip Glass. Palestine has worked among others with musicians such as Pan Sonic, David Coulter, Tony Conrad and Michael Gira. He has released more than 20 solo albums and played at festivals all over the world.

This interview on the occasion of the exhibition GesammttkkunnsttMeshuggahhLaandtttt at Kunsthalle Wien Karlsplatz 18/9 – 8/11 2015, is a shortened version of a text published by BOMB Magazine in 2014. It allows a comprehensive view on the world of Charlemagne Palestine.

An audience with Charlemagne Palestine: the performance artist and playful auteur of modern minimalist composition details a life searching for otherworldly peace.

These unpublished pieces are probably his most contemporary music work, build on the same principle with other instruments of what he discovered on piano with Strumming mid-70. This is an unique variation of the way to compose. A perpetual rise in a continuum of sound.

A long neglected musician, composer, performer and visual artist, Charlemagne Palestine is only recently recognized as a driving force in experimental music scene. Through many years of his recordings have been so difficult to obtain and his performances involving long sound masses could be heard only as an obscure story-telling. His early work with carillon and electronic sustained drones has given place to his better known piano work in the seventies, concerts in which many times Palestine bleed his own hands after an exhilarating playing technique. After years of retirement doing visual installations and traveling, the nineties has been more friendly with Palestine. Many young musicians value his work and some small independent record labels are particularly diligent with remarkable releases of his work. This interview was done in Barcelona, in November 2000 during LEM festival of experimental music. Many quotes will drive interested people to many other items Palestine-related.